The NICD reports 26,976 new COVID-19 cases that have been identified in South Africa, which brings the total number of laboratory-confirmed cases to 3,231,031. This increase represents a 32.2% positivity rate. As per the National Department of Health, a further 54 COVID-19 related deaths have been reported, bringing total fatalities to 90,226 to date.

20,436,207 tests have been conducted in both public and private sectors as per the table below.

THE 7-DAY MOVING AVERAGE NUMBER OF NEW CASES BY PROVINCE
The proportion of positive new cases/total new tested today is 32,2% which is lower than yesterday (34,9%). The 7-day average is 28,0% today, which is higher than yesterday (27,2%). 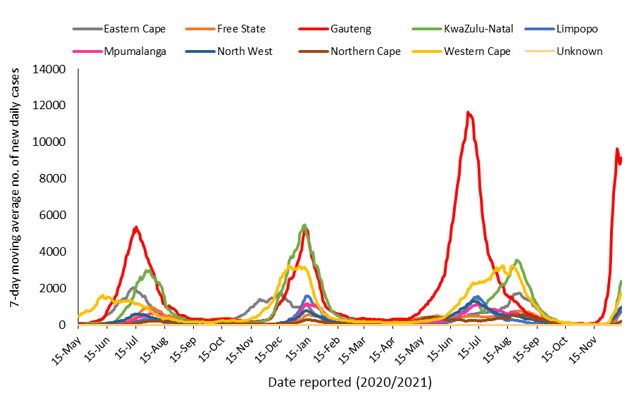 For the Gauteng province specifically, the below graphic indicates fewer hospitalisations and deaths, in comparison to previous waves. Although the data are still being gathered, the evidence suggests that the current wave may be milder.

HOSPITAL ADMISSIONS
There has been an increase of 620 hospital admissions in the past 24 hours. The following table is a summary of reported COVID-19 admissions by sector.

Ramaphosa Will Not Resign, Spokesperson Says

ANC NEC To Have Emergency Meeting

President Must Step Down – Outa

Walus To Remain In Jail After Stabbing, Awaiting Medical Clearance

Zimbabwe Scores Another First Against HIV In Africa

NDZ Calls On Ramaphosa To Step Aside

Phala Phala Panel Finds Ramaphosa May Have Questions To Answer

What to Eat and Drink in South Africa